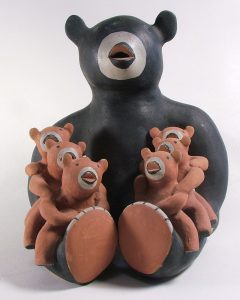 It has been over 11 years since I found my best yardsale find ever. A family was selling off a lot of things from an estate and had no idea what they had (which often happens). Sitting on the table were these two pottery figures, a bear with six little bears in his lap and a drummer boy. I could see they were hand made and signed. The lady selling them told me they would look nice in a garden. Price? They were only $2.50 each. Of course I took them.

When I got home I started doing research. There was not a lot on eBay for comparison, so I contacted a dealer in New Mexico who seemed to have some similar pieces. He got back to me and said that the bear was made by a Cochiti Pueblo man named Louis Naranjo. He was known for making bear storytellers. Mr. Naranjo was no longer living and had work in the Smithsonian. 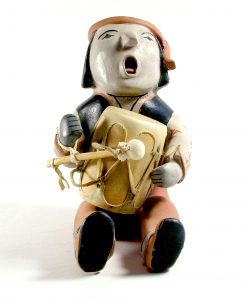 The drummer was made by a lady from the Cochiti Pueblo named Ada Suina who is considered one of the finest active Cochiti potters active at the time. The background colors on the face and clothing come from colored slip that is getting difficult to find.

The dealer told me that he had known both people, and that Ada Suina was not making very many pieces now. He offered me $1400 for the two figures. Believe it or not, I almost did not take it. While the money could be put to good use, the opportunity to own such beautiful pieces of art would most likely not come again.  However I knew that it would be sad if one should get broken or damaged and it would make sense to let them go to a true collector.

Sometimes I do regret selling them.

385 thoughts on “A Story About Storytellers”