I have decided to write about some of the more interesting things I have found on my “hunts”.

Shell necklaces, you see them all the time at yard sales and thrift shops. I almost passed it up that morning. The lady had some nice vintage jewelry and great prices. As I was ready to leave, I decided to buy the string of shells to add to the morning’s little collection. After all, she was only asking $1 for them. She said they had been her mother’s. 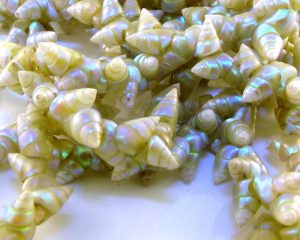 Later, I went through the jewelry and was well pleased with it. At the bottom of the pile were the shells. They were very light weight and tiny. The color intrigued me, though. The shells had a blue sheen as pretty as a lot of opals. I figured it might be interesting to try to find out what they were. Shell necklaces don’t bring much, as a rule, but it would help the description if I could identify them.

Typing in a search for “small iridescent blue shells” I came up with quite a few results. Surprisingly, one on eBay was going for over $300. That got my attention. The photo did look a lot like the strand I had. They were calling them “marineer” shells and they were from Tasmania.

It appears that the shells were probably more than 50 years old. The tiny marineer shells are only found in a small area in Tasmania, and they are very rare. The Aborigine people have been using them to make necklaces for hundreds of years. Presently the gathering of these little beauties is restricted to only a few women of Aborigine heritage. It can take a year or more to find and clean enough shells to make a necklace. Mine was over 50″ long. 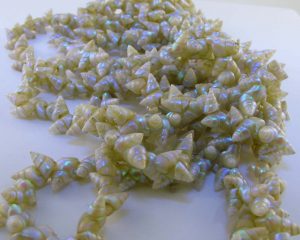 Most of these older necklaces are in museums in Australia. I listed mine on eBay, and received email from people in Australia who were very interested in buying it. The necklace sold for a nice price to a woman of Aborigine heritage who was very excited to find one of the rare strings. My pretty little shells went back home to Tasmania in a black velvet case, suitable for a national treasure. The buyer was thrilled.

Over the years, a few people have contacted me asking if a necklace they found was marineer shells. Most are not. A small, polished troca or a turbo shell sometimes looks a lot like a marineer shell. The marineer shells are very small and sort of elongated. I have seen a few strands for sale that were definitely not marineer. Be sure to do your research. The old necklaces are usually on string.