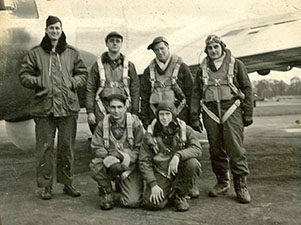 From the book We Were Eagles Vol. 3: The Eighth Air Force at War
June to October 1944 By Martin Bowman

On 8 July Marie Helena, a 452nd Flying Fortress with two crew members dead and three injured and with two engines dead and the radio system knocked out, was unable to receive wireless warnings from escorting fighters and almost landed at a German aerodrome before finally coming down on an American fighter strip in France. Strangely enough, the burst of flak which wounded the crew members was responsible for releasing the Fort’s bombs on the target.
The plane, piloted by Lieutenant Robert H. Smith of Grantview, Washington, was ripped by flak four separate times during an Eighth Air Force bombing attack. The first barrage came just before the target was reached. A direct hit completely sheared off one propeller and so badly damaged another engine that Smith had to stop its propeller to keep it from spinning out of control. The co- pilot, John E. Thomsen, and the navigator, Joseph F. Beauregard, were killed by flying fragments of jagged steel.
The second barrage occurred just after, when the plane had already fallen out of formation and Smith was preparing to fly the plane alone· Juan Morales, the bombardier, was looking over the target with his finger on the release button. Another burst of ant i-aircraft fire rocked the crippled bomber, sending fragments into his right leg. Involuntarily, his muscles contracted and his finger pressed the salvo switch, releasing the explosive cargo.
Without reporting his own condition, Morales made an effort to revive the navigator and, seeing this was useless, entered the cockpit to try and help the pilot manage the controls. A third storm of flak knocked out the wireless and interphone systems and punctured the oxygen lines. The radio operator, S/Sgt John L. Kayes, was hit in the left shoulder but ignored his own painful wounds to give first aid to the top turret gunner, T/Sgt Wilfred H. Muningham, who had been struck in the right leg. The ball turret gunner, S/Sgt Jack S. Lodwig, left his compartment with the oxygen supply cut off and just barely managed to crawl out of his turret before he passed out. S/Sgt Donald R. Tucker, the left waist gunner, carried Ludwig into the radio compartment, where he regained consciousness.
On the way back home Marie Helena was flanked by two P-47s. As the bomber headed toward the airfield, the Thunderbolts at first tried to send it a radio message but there was no reception; they then signaled by dipping a11d wobbling their wings. ‘I thought those acrobatics were by way of landing instructions,’ said Smith. ‘I prepared to come down but suddenly a barrage of flak, machine-gun and small-arms fire exploded around us. Too late, I realized that our “guardian angels” had been trying to warn us away from a Nazi aerodrome.’
Flak from the fourth barrage severed control cables in the Fort’s tail section and left the fuel tanks punctured and leaking. The tail gunner, S/Sgt William M. Lorig, and the right waist gunner, S/Sgt Everett L. O’Malley,(my dad) lightened the bomber by throwing overboard all guns, ammunition, flak suits and any movable equipment. Lieutenant Smith followed the P-47s to their base in France and as he came over it, another of the two remaining engines ran out of gas and quit. With his instruments shot out, he had to come down on the runway on the first try. Marie Helena came down smoothly alongside a waiting ambulance, which removed the wounded men to an air evacuation hospital. After spending the night at the fighter station, the uninjured crewmen were flown back the next day in a hospital plane.

According to my dad, he and the S/S William M. Loring and my dad jumped out of the plane after throwing out all they could. They ended up walking to Paris. In the crew photo Dad was on the front row on the right side.